Donald Schenkel (1991) creates subtle gradients with oil paints. He seeks for smoothness in color transitions that can lead the eye into the faraway. Sometimes these colors flash purely from the canvas, at other times they are diluted into darkening twilights. Diverse surfaces like glass or canvas carry layers of paint in distinctive ways, giving rise to an ever-greater sense of depth or translucent lightness. 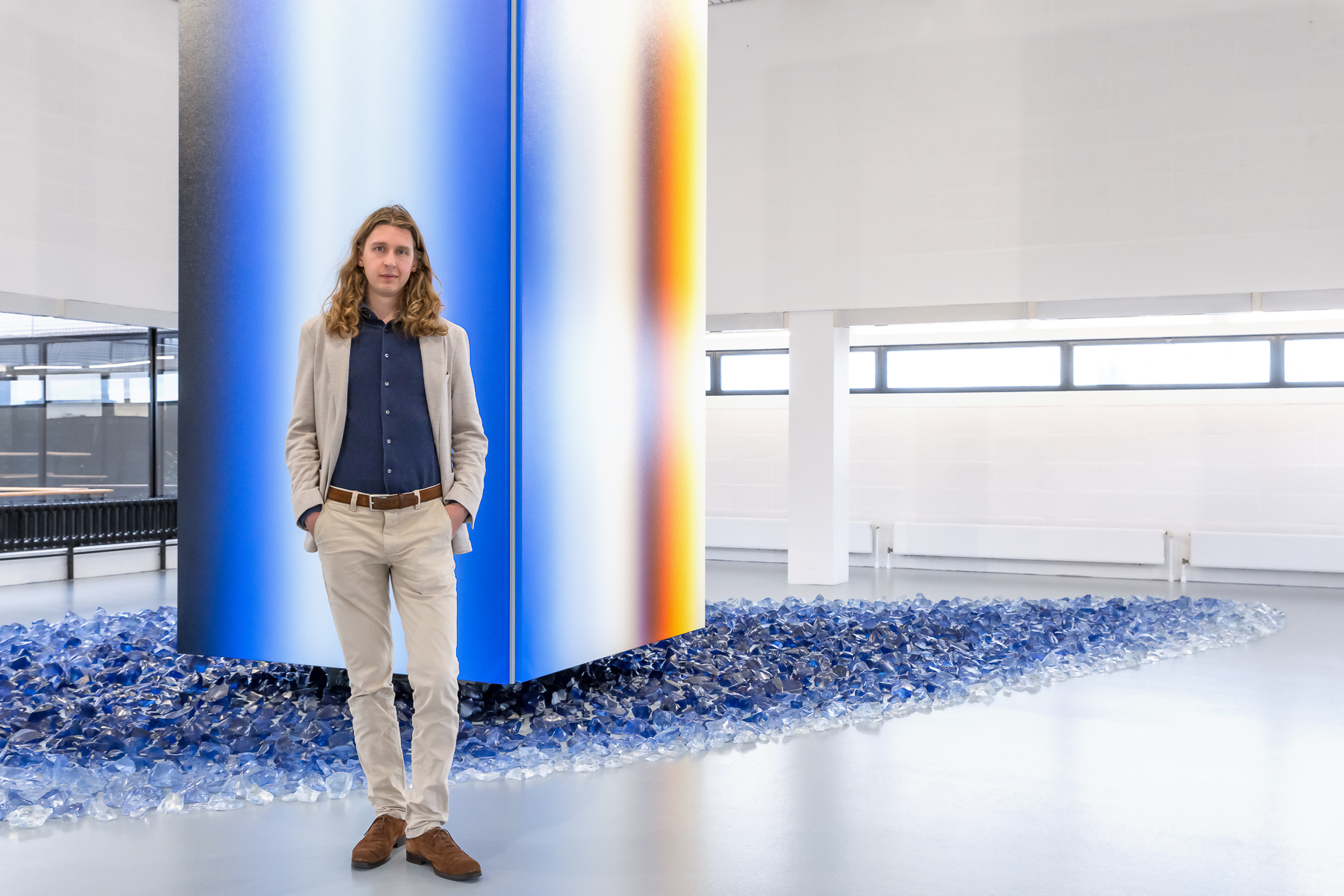 During the years of working on gradients, several threads have emerged in his artistic practice. Approaching oil paints as material instead of a means to create an image, led to a focus on the qualities of paints and the behavior of colors. Translucent blues lead the way to a sense of endless space and light. Translucency expresses depth in the sense of an expanse: it gives space. Color gradients can invoke the impression of translucency, yet at the same time it is a very real characteristic of oil paint as it can appear like glass or lacquer. Often fixed on aluminum plates these color transitions seem to float.

On the other hand there is the depth expressed by shadows dark gradients in which the lighter colors seem to dissolve. Shadows linger on the edge of the unknown, mystical and dark. Yet these gradients contain a soothing subtlety that makes them the natural viewpoint for contemplation. Often made on wood and sometimes appearing as sculptures, these color transitions are grounded but deep.

As the visual language develops geometrical shapes form the boundaries of gradients. It is not clear whether they float in space or are planes of gradients put in perspective. These shapes play with the same sense of depth and immaterial that also seems to be the quality of blue itself. In working with glass and perspex as transparent materials a whole new field of possibilities is laid bare.

Multiples of One – solo, Root Gallery – Rotterdam, The Netherlands, Aug-October

Beyond and Below – duo, Assembled by Root gallery, Rotterdam

Inside | Outside at Kreaz – group, Makkum, July/September

Co-curator at Galerie Lecq, Rotterdam, The Netherlands, in collaboration with Sue van Geijn

Co-curator of When the Dust has Settled, Rotterdam, in collaboration with Yvonne de Jong and MILLTEN Rotterdam

2018
Co-curator of The Mattering of Colour, Rotterdam, in collaboration with Yvonne de Jong and MILLTEN Rotterdam

2014-2016
Organizing lectures/debates on Art, Design and the Art World

Part of the In4Art collection